I am not actively pursuing mathematical research anymore. However, this page still contains my work and I intend to keep it uptodate. Comments and questions are still welcome!

I obtained my PhD in 2012 at Utrecht University under supervision of Hans Duistermaat, Erik van den Ban, and Heinz Hanßmann. I worked on persistence of noncompact normally hyperbolic invariant manifolds; I have extended this theory to a setting of general Riemannian manifolds under the assumption of bounded geometry. My PhD thesis is available below, see my CRmath article for a brief statement of the results.

After my PhD, I was a postdoc at Imperial College London in the dynamical systems group and in the geometric mechanics group of Prof. Darryl Holm until April 2015. Between June–December 2015, I was a visiting researcher at PUC-Rio, and between February 2016–April 2017 I held a postdoc position at ICMC-USP in São Carlos, Brazil.

My work includes applications of normal hyperbolicity to network dynamics and biomechanics. At Imperial College I furthermore worked on geometric mechanics approaches to image registration and fluid dynamics. In a current project with Heinz Hanßmann, we look at persistence of normally hyperbolic KAM tori, where we pay special attention to the boundary of the invariant manifold.

Another research project originating from my PhD work is to investigate nonholonomically constrained systems as reduced systems and the question of which friction forces realize the Lagrange-d'Alembert description of such systems in the limit of infinite friction. See my talk given at the AIMS 2016 conference and my paper on realizing nonholonomic dynamics. 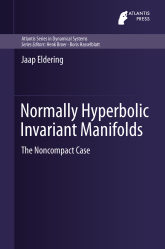 See also my ORCID and ResearcherID, and my articles on arXiv and MathSciNet.

A list of errata to my published works is available. Additional corrections are gratefully welcomed!

I have given or will give the following talks/presentations: